Targeted by Sam Darnold 17 times in the season opener, Crowder converted those targets into 14 catches for 99 yards.

Throughout the 2019 NFL season, no receiver had more receptions in any game. (Running backs Christian McCaffrey and Austin Ekeler had 15-reception performances last season.)

Unfortunately for Crowder and the Jets in general, Darnold missed Weeks 2 through 5 (bye included) with mono and returned in Week 6.

On a full-season basis, Crowder led the team in receiving across the board -- targets (122), receptions (78), yards (833) and touchdowns (six). On a per-game basis, Crowder was much more productive when Darnold was under center.

Tight end Chris Herndon IV (one of our favorite sleepers) returns after missing virtually all of 2019 due to suspension and/or injury. But there is a lot of turnover and uncertainty within the receiving corps.

Perriman was impressive down the stretch (three 100-yard games in December) in Tampa and Mims enters the league with an impressive athletic profile. That said, Perriman (knee) and Mims (hamstring) have been dealing with injuries as is Vyncint Smith (the team's WR4 in 2019), who is out five to eight weeks after having core muscle surgery.

To add depth to a banged-up receiving corps, the Jets have recently signed Chris Hogan and Donte Moncrief. The point here is that Crowder should continue to be peppered with targets by Darnold.

Regardless of scoring format, Crowder offers fantasy owners plenty of value as a WR3/flex heading into 2020.

Based on the cumulative fantasy points allowed in 2019 by their opponents this season, here are the ranks for Jamison Crowder and the Jets receivers rank in 2020 strength of schedule:

Based on scoring format, here are the current Fantasy Football ADPs for Jamison Crowder:

Below is a chart of Jamison Crowder' half-PPR ADP over the past month: 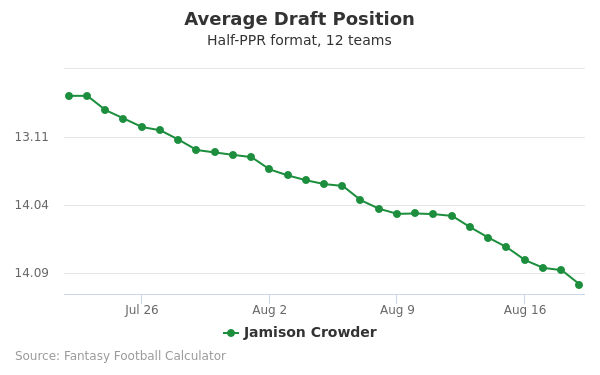 Here are our full-season projections for Crowder:

Drafting Crowder isn't a swing-for-the-fences type of pick but more like a double to the gap. And if you keep hitting doubles throughout your draft, you're going to be in position to win a fantasy title. If both he and Darnold can stay healthy for a full season, it wouldn't be a surprise to see Crowder finish as a top-24 fantasy wide receiver in half-PPR formats based on volume and consistency. Either way, he's currently inside our top-36 fantasy wide receiver rankings (as a WR3) while being drafted as a back-end WR4 in half-PPR formats.