Earlier in his career, Ingram had durability concerns as he missed three-plus games in four of his first five NFL seasons. With the exception on a four-game suspension to open last season, Ingram hasn't missed any (other) regular-season games over the past three seasons.

In something of a role reversal from 2017 to 2018, Ingram became the complement to Alvin Kamara, who looks to perform as a top-four fantasy back for a third consecutive season. On a per-game basis last year, Ingram set five-year lows in both rush attempts (11.5) and receptions (1.8).


Lead back in run-heavy attack

As Ingram begins the next phase of his career, he steps in as the favorite for a lead-back role for what is one of the league's most run-dominant offenses. That said, his grip on that role is certainly far from iron clad.

Gus Edwards showed how productive he could be as a runner over last season's final half. Rookie Justice Hill may enter 2019 as a complementary part of the backfield, but he has the potential for much more than a secondary role if the opportunity presents itself.

The days of Brees slinging it all over the yard are over as the future HOFer threw it just 489 times in his age-39 season. Wanting balance in their offensive attack, the Saints ranked fifth in the NFL in run-play percentage in 2018.

But no team ran the ball more in absolute terms than the Ravens (547 attempts), who ended 2018 third in run-play percentage despite ranking just 25th before Lamar Jackson took over as the starting quarterback. Of course, a huge reason for the jump is Jackson himself as he had more rush attempts than pass completions in six of his seven regular-season starts.

Baltimore should lead the NFL in rushing attempts this upcoming season and Jackson may even lead quarterbacks in carries. That said, the team will look for their thin-framed quarterback to run less often in 2019. Jackson's presence and threat to run, however, helps to open up running lanes as teams will undoubtedly try to make the Ravens beat them through the air.

Even though he wasn't as productive as I would have expected last season, Ingram was fantasy's RB21 (RB20 in PPR) from Week 5 -- when he returned from suspension -- through the end of the year. Setting five-year workload lows, it could have been even worse.

Before last season's complementary role to Kamara, Ingram had finished as a top-10 fantasy running back in back-to-back seasons. Ingram was the RB6 in 2017 and the RB10 (RB8 in PPR) in 2016.
In those two seasons combined, Ingram was one of four players to have more than 2,000 rushing yards, 100 receptions and 20 combined touchdowns. The other three were Le'Veon Bell, Todd Gurley and LeSean McCoy.

An underrated receiver out of the backfield, only seven running backs have more receptions than Ingram (175) over the past four seasons. Ingram had only 21 catches last season, but he had 50, 46 and 58 from 2015 to 2017, respectively.

Ingram is also quick to get north-south as a runner. According to the NFL's NextGen stats, Ingram's 2018 average TLOS (Time to Line of Scrimmage) was 2.58 seconds, fourth-lowest among qualified running backs. Teammate Gus Edwards ranked first (2.43 seconds) in TLOS.


OL among the best

Just (or even more) important to the success of a running back than his own ability is the team's offensive line. And the good news is that Ingram won't suffer (much of) a downgrade as he transitions away from one of the league's better offensive lines.

Here's what PFF's Mike Renner wrote about Baltimore's offensive line: "Marshal Yanda’s return and Ronnie Stanley’s emergence as one of the best left tackles in the league fueled this team (and running game) down the stretch. Stanley earned the third-highest pass-protecting grade of any tackle this season, while Yanda was the third-highest graded guard."

No running back or team has a more favorable fantasy football strength of schedule than Ingram and the Ravens based on the fantasy points their 2019 opponents allowed last season.

The Ravens will face the Bills, Jets and Browns in the fantasy football playoffs (Weeks 14 to 16) and the 60.81 cumulative fantasy points per game those three opponents allowed last season are the eighth-most.

Below is a chart of Mark Ingram's ADP over the past month: 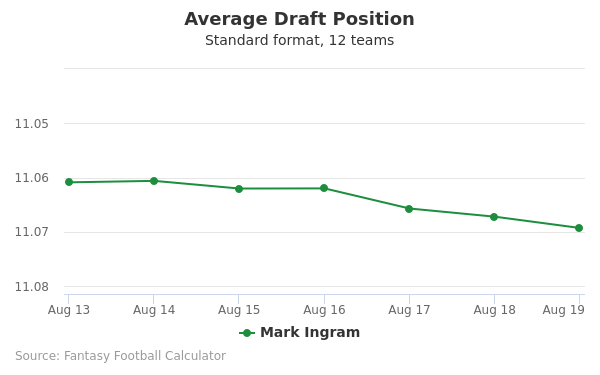 Here are our full-season projections for Ingram:

As noted above, Ingram's current ADP is RB22 and he currently stands at RB20 in our fantasy football rankings, but I think there is upside for much more with little downside risk (barring injury, of course). While it may be somewhat of a crowded backfield, no team wants to run the ball more the Ravens and Ingram will move to the front of the line for work.

Check out more of our content:
Good luck in your 2019 fantasy football leagues!