In the spirit of "if you don't have anything nice to say, don't say anything at all," Houston Texans running back Lamar Miller posted a career-high 9.1 yards per reception last year.

In addition, he actually scored the 14th-most fantasy points (16th in PPR) at the position in 2017. In fact, I suppose he outperformed his 2017 ADP (RB17), even if it didn't necessarily feel like it.

The bad news is that Miller set a career low in yards per carry (3.7), second to only his 4.0 YPC in 2016. Moreover, Miller's workload declined at the end of the season as Alfred Blue (46) had nearly 20 more carries than Miller (27) over the team's final three games.

During that span, Miller had nine, 10 and eight carries, respectively, after getting double-digit carries in each of the first 13 games to begin the season.

If third-round pick D'Onta Foreman did not tear his Achilles, the workload could have been even less down the stretch.

That said, there is some uncertainty around Foreman's status for the start of the season. The team is hopeful that he'll be ready to go for training camp. If he ends up on the Physically Unable to Perform (PUP) to begin the season, however, he would be forced to sit for the first six teams.

Even in that unlikely scenario, that may only delay the inevitable if Miller is unable to improve his efficiency. Giving the second-year back the bulk of carries with Miller assuming more of a passing-down role could happen at some point during the 2018 season even if Foreman starts on the PUP list.

Foreman had double-digit carries in five of his 10 carries before sustaining his injury. Foreman averaged 4.84 YPC over his final six games (vs. 3.35 YPC in his first four games). If Foreman picks up where he left off, Miller may see a reduced workload even if his efficiency improves.

Before the draft, there was even some speculation that the Texans could part ways with Miller. That seems unlikely at this point, but his grip on a healthy workload is not secure.

Another thing to not get excited about is Houston's offensive line. Per PFF, the unit ranked 32nd (of 32) last year. (Is that bad?!)

In general, the Texans offense racked up points in a hurry with Deshaun Watson under center -- 30.71 (real) points with him vs. 13.67 (real) points without him. Miller wasn't more efficient with Watson, in fact he was less efficient (3.58 YPC through seven games), but he did score four of his six touchdowns with Watson.

Should Watson stay healthy for a full season, there is a certain "high tide raises all boats" type of situation in terms of fantasy production for Houston's skill-position players.

Based on the fantasy points allowed to opposing running backs last season, Miller and Houston's running backs have a middling strength of schedule (17th of 32) for Weeks 1 to 16 in 2018. 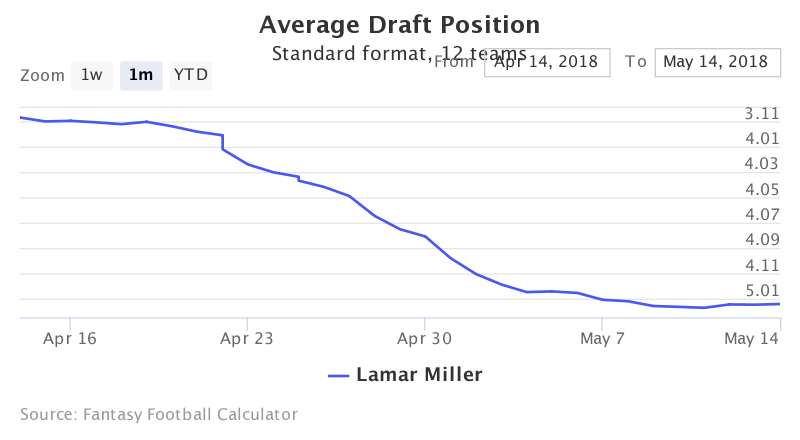 Even without considering the other running backs being drafted around Miller's 5.02 ADP, backfield mate D'Onta Foreman is not being selected until the ninth round on average in FFC drafts. It wouldn't be crazy to say that Foreman should be drafted earlier than Miller; not the other way around.

Below you will find full-season projections for Houston Texans RB Lamar Miller for the 2018 NFL season:

Based on his current ADP, Miller is someone that I'd avoid and I'd much rather have Foreman in terms of the discount. That said, it wouldn't be much of a surprise if sentiment pushes Miller further down fantasy draft boards more than reality warrants. Until that point (if we get there), I'll be overweight on Foreman and underweight on Miller.

Check out more of our content:
Good luck in your 2018 fantasy football leagues!